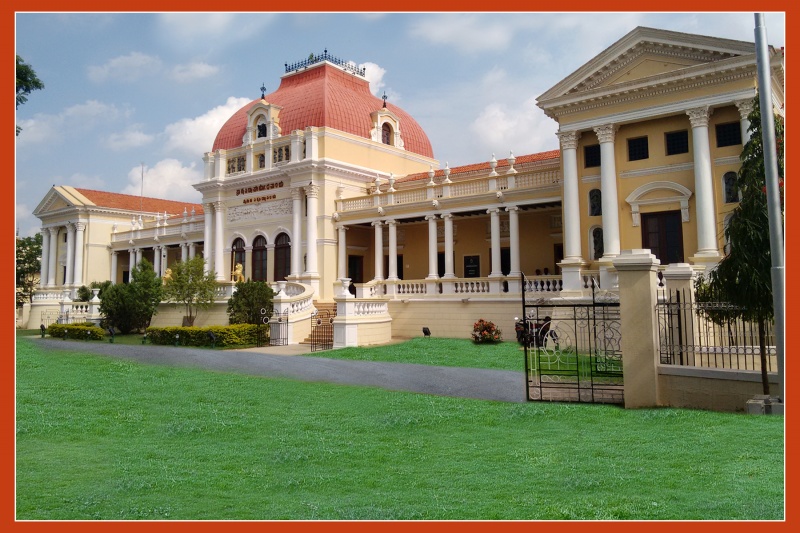 Palm leaf manuscript is one of the oldest medium of writing in India especially in Southern India. It is also the major source for writing and painting in South and Southeast Asian countries including Nepal, Sri Lanka, Burma, Thailand, Indonesia and Cambodia. Though palm leaf writing was practiced since the ancient times its precise origin is still unclear.

Palm-leaf manuscripts are manuscripts made out of dried palm leaves. Palm leaves were used as writing materials in the Indian subcontinent and in Southeast Asia dating back to the 5th century BCE, and possibly much earlier. Their use began in South Asia, and spread elsewhere, as texts on dried and smoke treated palm leaves of Borassus species (Palmyra palm) or the Ola leaf (leaf of Corypha umbraculifera or the talipot  palm).

Palm leaf manuscripts were written in ink on rectangular cut and cured palm leaf sheet. Each sheet typically had a hole through which a string could pass through, and with these the sheets were tied together with a string to bind like a book. A palm leaf text thus created would typically last between a few decades and about 600 years before it decayed due to dampness, insect activity, mold and fragility. Thus the document had to be copied onto new sets of dried palm leaves.

The oldest surviving palm leaf Indian manuscripts have been found in colder, drier climates such as in parts of  Nepal, Tibet and central Asia, the source of 1st-millennium CE manuscripts.

The Oriental Research Institute (ORI), University of Mysore, Mysuru, is a Research Institute with collections of very rare palm leaf manuscripts and paper manuscripts.  The institute was established in Mysore by none other than His Highness Sri Chamaraja Wodeyar Bahaddur, the then Maharaja of the erstwhile State of Mysore (Mysuru Samsthana).

Right from its inception the Oriental Research Institute (ORI) has been housed in the architecturally attractive Jubilee Hall built in 1887 to commemorate the Golden Jubilee of Queen Victoria’s accession to the British throne.

The Oriental Research Institute’s aim is to collect, preserve, collate, edit and publish rare valuable Sanskrit and Kannada Palm leaf as well as paper Manuscript of our Nation.

Thousands of Palm leaf and Paper Manuscripts were collected and Pundits well-versed in Sanskrit, Kannada, English and other Languages were appointed for identification, classification and cataloguing of those manuscripts. In addition to the manuscripts many rare books in Sanskrit, Kannada and English were also collected by the pundits working in the Institute for study, research and publication purposes. As a corollary, a library consisting of works on literature, culture and allied subjects was also developed. Valuable classics in Sanskrit and Kannada were critically edited by the pundits of the Institute and published with scholarly introductions.

At the beginning, the ORI was running under the guidance of the Education Department of the Government of Mysore under the name “The Government Oriental Library”

In 1916, the University of Mysore was established and the Institute became an integral part of the University. Later in the year 1946 the name of the institute changed to “The Oriental Research Institute’’. In 1966 the Kannada manuscripts and Kannada books in the institute were transferred to the Institute of Kannada studies in the Manasagangothri Campus. The Oriental Research Institute is now fully devoted to the collection, preservation, study and publication of Sanskrit manuscripts palm leaf, paper and also rare old Sanskrit books.

All the Research Scholars of ORI are well-versed in Sanskrit, Kannada and English. Scholars have attained Masters and Ph.D in Sanskrit and some have Sanskrit Vidwat certification.

Scholars serving the institute are traditional scholars equipped with the knowledge of modern science and technology. The scholars are adept in South Indian scripts like Nandinagari, Grantha, Devanagari, Kannada, Telugu and Tigalari etc.  Many Scholars of ORI have attended and presented scholarly papers at National and International Seminars, Workshops and Conferences.

In 1954, for the Preservation of Manuscripts, a microfilm section was started. More than four thousand valuable palm leaf manuscripts were microfilmed. Now the preservation made easy with a Digital HDR Scanner.

Arthashastra is a work on Indian polity, economics, military science, business management, administration, civil law and governance. Gemology and metallurgy are some interesting parts in it. Training of elephants and horses for warfare is also depicted here. Taxation policy is described very clearly.

The complete palm-leaf manuscript of Arthashastra of Kautilya in granta script was discovered and edited for the first time by Dr.R. Shamashastri, a well known scholar and Librarian of ORI. In 1909 for the first time in the world this work was published. Publication of this work brought international acclamation to this Institution.

Sritattvanidhi is a scholarly work of His Highness Krishnaraja Wodeyar III, the ruler of the erstwhile state of Mysore. The king himself was a versatile writer both in Kannada and Sanskrit. This work is in nine Volumes. They are Shaktinidhi, Vishnunidhi, Shivanidhi, Brahmanidhi, Grahanidhi, Vaishnavanidhi, Shaivanidhi, Agamanidhi and Kautukanidhi comprising almost all aspects of Indian traditional knowledge in a nutshell is him magnum opus. The elegant traditional paintings and other illustrations of this monumental work enhances its attraction.

Among the nine nidhis, Shaktinidhi, Vishnunidhi, Shivanidhi and Brahmanidhi were published. The printing work of the 5th Volume Grahanidhi with Kannada and English translation is completed and the work is ready for publication. The editing work of Vaishnavanidhi, the 6th Volume of Sritattavanidhi is in progress and this will also be published soon.

Navarathnamani  Mahatmya, Tantrasara Sangraha,  Vaidyashastradipika are three scientific Sanskrit works with Kannada & English translations.  These were jointly published by the ORI and Prasaranga.

Journals of the Institute

To create public awareness regarding the activities and progress of the institute a Journal by name “The Mysore Orientalist” was started.  Till date 18 volumes have been published.

The Institute has a library. It has more than 40,000 printed books in Sanskrit, English, Kannada and other languages related to Sanskrit Studies.  This library caters to the needs of teachers, students, research scholars and scholars of international repute from all round the world.

Renovation of the Building

In 2012, the Oriental Research Institute received a grant of $ 50,000 for the renovation of its heritage building from US Consulate General, Chennai. His Excellency Mr. Richard Verma, US Ambassador to India inaugurated the renovated building of ORI on 31st March-2015.